Mr. Fred Thackaberry wrote a history of the Club for the Centenary in 1982 and wrote:

“The exact date on which the Kenilworth Bowling Club first saw the light is, and likely to remain, an unsolved mystery. The legendary school copy book in which the first minutes were recorded has disappeared without trace. The back gardens where the original members played cannot be located with certainty but pointers suggest that they were behind numbers 29 and 30 Kenilworth Square, both of which houses were shown under the name of Mr. Charles Eason in 1890. 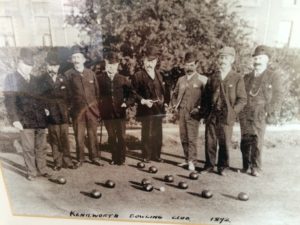 The history goes on to state that the Club acquired a 25-year lease of Grosvenor Square in April 1909.

The National Library has some photographs of the Club from the early days all made by the Eason family: ?1920s, ?early 1930s, ?late 1930s. The show the different locations for the tennis club over the years and the extension to the original club house.